Fear of crowds is very common for a lot of people whether they are single, married, male, female, high flyers, students, teachers, old or young .

I know how it feels to be alone in a crowd. I often feel totally overwhelmed in a large crowd of people, especially if I don’t know anyone in that crowd. It can feel like I am on the periphery and not allowed into the inner circle, and that, of course, makes the fear even worse. I wonder if the fear is actually of the crowds themselves or is it a fear of feeling lost or being unnoticed amongst a large number of people?

I know when I am in a large crowd of people entirely ‘on my own’ I feel nervous; I have an irrational fear that nobody will even notice that I am there.  I look at the little groups of people who do know each other within that large crowd enjoying themselves and the company of each other and that somehow increases my nervousness and the fear.  Of course they may feel just like I do but when I feel that fear, it certainly looks like they’re having a great time and I’m not. When I am in a large crowd of people and I have my own ‘group of people’ with me I feel safe and secure and know that I am noticed and therefore I don’t have those same feelings as when I am alone in a crowd.

Did you grow up in a house where “children were seen and not heard”? I know I did. That might be the root of these feelings of nervousness and insecurity as they are for me. I can ultimately relate feeling like this to my childhood when I was constantly told that I should be seen and not heard.  So I would sit in the corner with my toys and only speak when I was spoken to.

Having worked hard on discovering my authentic self, discovering, acknowledging and accepting those unexpressed feelings and emotions of when I was told to be seen and not heard,  I now think and act differently.  I know there is a solution to this fear of crowds.  Based on what I know to be true about fear.  I know that FEAR is:

I have found the solution that works for me and this might work for you too:

Even if being you just says it’s ok to not talk to anyone – which is a good friend of mine’s solution for her fear of crowds.  She’s decided to not push herself and just enjoys watching people. Funny thing is, she reports people come and talk to her.

I know that I am not alone in feeling alone.  There are other people who are in the same position as me and I make a special effort to speak to them as well and include them in the conversations.  The energy and dynamics of the crowd change visibly and it becomes much more enjoyable.

If you anything resonates with you from the above, I will be delighted to hear from you, please contact me .

I am helping people to become the very best version of themselves and would love to work with you too.

A lot of people carry around with them a whole load of “baggage” or “clutter” in their minds. When I say this I mean that they are still holding onto things that they feel they ‘should’ do, but  they really don’t want or need to. For instance the person who they had a row with, but neither is now speaking to the other – but both want to only they both feel the other ‘should’ get in touch first.  The ‘coulds’ and ‘shoulds’ in your life that hold you back – you want to let go, but you don’t.

This is very common and you are definitely not alone, I have done it myself.

Are you carrying around with you a lot of emotional baggage that you could be doing without? If you were to lose that emotional weight you could be focusing on something more productive instead.

Does this resonate with you?  If you are carrying around a lot of emotional baggage, I bet it has a negative influence on your confidence and self esteem. 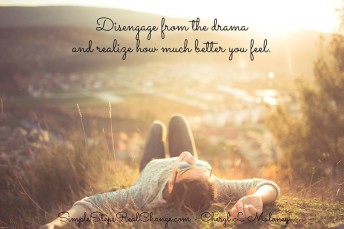 Take a look at your life and begin to get rid of this baggage by asking yourself some questions and by completing the following exercise.  In effect, what you are doing is making certain tasks “complete”, drawing a line under them and moving on.

Another term for this is “psychological completion” or just “completion”.

Take as long or as short a time as you like to answer these questions and finish the exercise. By writing your answers down they become more real.

Get to it and watch your confidence soar!

Make an action plan to get rid of or communicate to others about the things that you have been putting up with. Take action!

Make an action plan to reduce this number! Take action!

Let go of as many coulds, woulds, shoulds, maybes, oughts as you can. Take action!

By completing these exercises you will be able to focus more on the here and the now. You will now be able to let go of some of the things that have been taking up your valuable attention – those things that knock your self esteem.

If you need help with any of the above, I will be delighted to hear from you, please contact me .

I am helping people to become the very best version of themselves and would love to work with you too.

This moment is the first moment of the rest of your life.

A "How to Thrive" Guide After Divorce